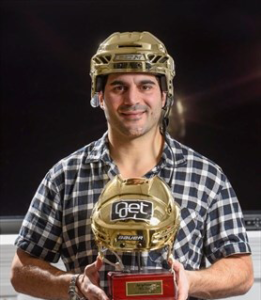 One of Hamilton’s most-dominant hockey players is back on home soil after a decade-long European tour.

When he stepped onto the ice at the Dave Andreychuk Mountain Arena back in November for the first time in an age, he had a bit of a flashback. Back to the days a decade-and-a-half ago when, as a young man, he used to dominate the place and was the most-feared offensive player in provincial junior hockey.

A lot of frozen water has passed under the bridge since. He’s had a four-year university career. He’s had a 12-year pro tour that’s taken him all over the world. Now, a grizzled 36-year-old with a sprinkling of salt among the pepper, he’s closing the hockey loop by playing senior hockey back home for the Stoney Creek Generals. Which he finds hard to believe.

Not the team he’s on. The fact that it’s nearing the end.

Back in the early days of this millennium, he was this city’s most-dominant player. Back then he scored 50 goals in a ludicrous 38 games, set the Hamilton Kilty B’s single-season and career scoring marks, and won league scoring titles and MVP awards. That excellence earned him a scholarship to the hockey factory at the University of Maine.

His first year there, he scored 81 points in 61 games. Suddenly, his agent was on the phone saying European teams were lining up with their chequebooks open.

“I couldn’t do it,” he says. “I just really wanted to make sure over here that I couldn’t make it.”

Soares had grown up dreaming of making the NHL. He couldn’t give up on his goal that easily. But after a flurry of call-ups to the AHL and subsequent demotions back to Alaska — and then loans to Manitoba and Chicago — he finally called his representative.

A year in Germany was followed by two in Sweden and one in Austria. Then back to Sweden, back to Austria and on to Norway for four. It was nomadic, but it was a good life. There are fewer games than here, he was able to make plenty of money and experience different parts of the world.

In Vienna, he could explore the city’s rich history and architecture. In Austria and Germany, he could go to town on schnitzel and other delicacies. And in Sweden, he got to enjoy their over-the-top Christmases. With their special Christmas dinners.

“It was all different types of herring,” he laughs. “Pickled herring. Mustard herring. This and that. It wasn’t something I particularly enjoyed.”

But his game flourished. He regularly scored at a point-a-game or better. More than a few times he wore the gold helmet as his league’s top scorer. Once he had to wear a gold helmet and a special sweater as the top shooter.

Today, these garish baubles are tucked away in his home in Stoney Creek. He’ll eventually find a place for them once hockey is done. He’s not quite there yet.

He was going to play one more year of pro this season with the Brampton Beast of the ECHL so he could be closer to home. But that franchise that’s affiliated with the Ottawa Senators received some extra players when superstar defenceman Erik Karlsson was traded. That squeezed Soares out.

Looking for somewhere to keep playing, he checked out the senior league and liked it. Today his Stoney Creek Generals are in first place and he’s tied for the league scoring lead. And, in that game against the Hamilton Steelhawks back in November, he got to play at his old rink.

As a young man, his family always used to sit in one particular corner to watch him. Returning was bittersweet since his dad had passed away while he was in Sweden. So those days are gone. Yet, partway through the game, he caught himself peeking in that direction and there, in that familiar spot, were his uncle and aunt.

“It was cool,” he says. “It brought back a lot of memories.”

Soares has a wife now. A seven-month-old son, too. He surely has a few more miles on the odometer than he did last time he was there. And a whole lot more life experience.

But he scored a goal and had two assists that night.